Deep-Data-Mining is pleased to introduce the new book, Principles of Database Management – The Practical Guide to Storing, Managing and Analyzing Big and Small Data, by Lemahieu W., vanden Broucke S.,  and Baesens B. (ISBN: 9781107186125). The following is the book interview. 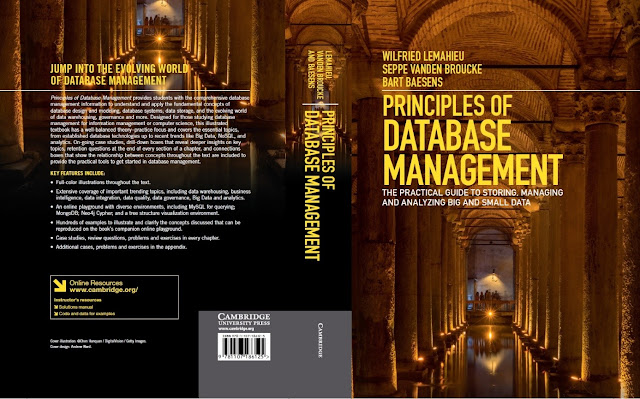 Why did you decide to write your book Principles of Database Management?

This book is the result of having taught an undergraduate database management class and a postgraduate advanced database management class for more than ten years at KU Leuven (Belgium).  Throughout these years, we have found no good textbook which covers the material in a comprehensive way without getting flooded by theoretical detail and losing focus.  Hence, after having teamed up together, we decided to start writing a book ourselves.  This work aims to offer a complete and practical guide covering all the governing principles of database management, including:

We hear a lot of companies complaining about bad data quality these days.  How can database management contribute to this?
First of all, data quality (DQ) is often defined as ‘fitness for use,’ which implies the relative nature of the concept.  Data of acceptable quality in one decision context may be perceived to be of poor quality in another decision context, even by the same business user.  For instance, the extent to which data is required to be complete for accounting tasks may not be required for analytical sales prediction tasks.  Database management can contribute in various ways to improving data quality.
A good conceptual data model capturing the business requirements as accurately as possible is the start of everything.  As discussed in the book, both EER and UML can be used for this purpose.  It is important to also list the semantic shortcomings of the conceptual models developed such that they can be followed up during application development.
A next important activity concerns metadata management.  Just as raw data, also metadata is data that needs to be properly modeled, stored and managed.  Hence, the concepts of data modeling should also be applied to metadata in a transparent way.  In a DBMS approach, metadata is stored in a catalog, sometimes also called data dictionary or data repository, which constitutes the heart of the database system.
Finally, to manage and safeguard data quality, a data governance culture should be put in place assigning clear roles and responsibilities. The ultimate aim of data governance is to set up a company-wide controlled and supported approach towards data quality, accompanied by data quality management processes. The core idea is to manage data as an asset rather than a liability, and adopt a proactive attitude towards data quality problems. To succeed, it should be a key element of a company’s corporate governance and supported by senior management.

Should all companies start to invest in NoSQL databases?

The explosion of popularity of NoSQL databases should be put in perspective considering their limitations.  Most NoSQL implementations have yet to prove their true worth in the field (most are very young and in development).  Most implementations sacrifice ACID (atomicity, consistency, isolation and durability) concerns in favor of being eventually consistent, and the lack of relational support makes expressing some queries or aggregations particularly difficult, with map-reduce interfaces being offered as a possible, but harder to learn and use, alternative.  Combined with the fact that RDBMSs do provide strong support for transactionality, durability and manageability, quite a few early adopters of NoSQL were confronted with some sour lessons.  It would be an over-simplification to reduce the choice between RDBMSs and NoSQL databases to a choice between consistency and integrity on the one hand, and scalability and flexibility on the other.  The market of NoSQL systems is far too diverse for that.  Still, this tradeoff will often come into play when deciding on taking the NoSQL route.  We see many NoSQL vendors focusing again on robustness and durability.  We also observe traditional RDBMS vendors implementing features that let you build schema-free, scalable data stores inside a traditional RDBMS, capable to store nested, semi-structured documents, as this seems to remain the true selling point of most NoSQL databases, especially those in the document store category.  Expect the future trend to continue towards adoption of such “blended systems”, except for use cases that require specialized, niche database management systems.  In these settings, the NoSQL movement has rightly taught users that the one size fits all mentality of relational systems is no longer applicable and should be replaced by finding the right tool for the job.  For instance, graph databases arise as being “hyper-relational” databases, which makes relations first class citizens next to records themselves rather than doing away with them altogether.

Many companies are investing in data lakes these days.  What is the difference with a data warehouse?

Much more recent than data warehouses, the data lake concept became known as part of the big data and analytics trend.  Although both data warehouses and data lakes are essentially data repositories, there are some clear differences as listed in the table below.

A key distinguishing property of a data lake is that it stores raw data in its native format, which could be structured, unstructured or semi-structured.  This makes data lakes fit for more exotic and ‘bulk’ data types that we generally do not find in data warehouses, such as social media feeds, clickstreams, server logs, sensor data, etc.  A data lake collects data emanating from operational sources ‘as is’, often without knowing upfront which analyses will be performed on it, or even whether the data will ever be involved in analysis at all.  For this reason, either no or only very limited transformations (formatting, cleansing, …) are performed on the data before it enters the data lake.  Consequently, when the data is tapped from the data lake to be analyzed, quite a bit of processing will typically be required before it is fit for analysis.  The data schema definitions are only determined when the data is read (schema-on-read) instead of when the data is loaded (schema-on-write) as is the case for a data warehouse.  Storage costs for data lakes are also relatively low because most of the implementations are open-source solutions that can be easily installed on low-cost commodity hardware.  Since a data warehouse assumes a predefined structure, it is less agile compared to a data lake which has no structure.  Also, data warehouses have been around for quite some time already, which automatically implies that their security facilities are more mature.  Finally, in terms of users, a data warehouse is targeted towards decision makers at middle and top management level, whereas a data lake requires a data scientist, which is a more specialized profile in terms of data handling and analysis.

How do Object Oriented DBMSs (OODBMSs) compare against Relational Databases (RDBMSs)? Why haven’t they been that successful?

OODBMSs offer several advantages.  First, they store complex objects and relationships in a transparent way.  The identity based approach allows for improved performance when performing complex queries involving multiple interrelated objects, avoiding expensive joins.  By using the same data model as the programming language to develop database applications, the impedance mismatch problem is no longer an issue.  In addition, developers can be more productive, as they are confronted with only a single language and data model.
Still, the success of OODBMSs has been limited to niche applications characterized by complex, nested data structures where an identity-based, instead of a value-based, method of working pays off.  An example is the processing of scientific data sets by CERN in Switzerland, where data access follows predictable patterns.  The widespread use and performance of RDBMSs, however, proved hard to displace: the (ad-hoc) query formulation and optimization procedures of OODBMSs are often inferior to relational databases, which all adopt SQL as their primary database language combined with a powerful query optimizer.  When compared to RDBMSs, OODBMSs are not that developed in terms of robustness, security, scalability and fault-tolerance.  They also don’t provide a transparent implementation of the three-layer database architecture.  More specifically, most OODBMSs provide no support for defining external database models, such as views in the relational model.

Why are so many companies still struggling with database legacy instead of investing in newer technologies?

Many firms still struggle with legacy databases due to historical implementations and limited IT budgets.  Hence, knowing the basic characteristics thereof is essential to the maintenance of the corresponding database applications and the potential migration to modern DBMSs.  Second, understanding the basics of these legacy models will contribute to better understanding the semantical richness of newer database technologies.  Finally, the concept of procedural DML and navigational access originally introduced by these legacy models has also been adopted by more recent databases such as OODBMSs.

This book covers a few decades of evolutions in the database world.  Which developments or patterns struck you as the most remarkable in the long run ?
The perseverance of SQL is really striking.  It survived object-oriented databases and XML databases, and after a while, many of its constructs were even incorporated in these paradigms.  More recently, there is considerable irony (and beauty) in the fact that one of the main tendencies of NoSQL development efforts is to mimic the convenient data retrieval and query facilities of, well, SQL-based databases.  Solutions for ‘SQL on top of NoSQL’ are all over the place.  And let’s not forget: SQL still remains a beautiful language.

You are reading one of the best blogs on Data Analytics and Data Mining!

Dr.Jiang Zhou's Linkedin Profile. He can be reached by email at jay.zhou@deep-data-mining.com